22 May Independent – A Number Review

Posted at 19:16h in Press by genesiswest 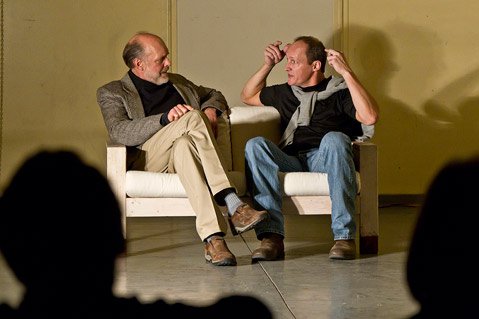 Photo by David Bazemore
The sci-fi premise of A Number supports a more universal theme of identity anxiety.

The top-floor exercise room in the detention center at the Santa Barbara County Courthouse is an unforgettable architectural achievement. It’s also a jail, and it feels like one. It thus made a suitably intense venue for the latest production from Maurice Lord’s Genesis West, a purveyor of consistently mind-blowing theater.

This was the soft opening for two weeks of pop-up and regular theater performances of Caryl Churchill’s play A Number, a two-man one-act premised on the potential impact of human cloning. A Number is also about the irreducible question raised by being alive — why me? Tom Hinshaw plays the father (insofar as that term applies) and Brian Harwell, the three sons — an even more uncertain status in this dialogue between a man and several human beings who share one genetic map.

Harwell and Hinshaw dig deep into the rich language of Churchill, ringing myriad changes on the anxieties and inferences that appear in the hall of mirrors that opens up with the possibility of human cloning. Every carefully calibrated scene circles around the deadly empty center of identity, and, due to the circumstances, things never come to rest. This great production of an important play should be seen, even at the risk of a night in jail. Visit genesiswest.org for the full schedule.